This is also a toilet - but it should not be

Coastline outside of Accra, Ghana. Sanitation cannot keep up with urbanisation in many developing countries. Photo: University of Copenhagen.

As more and more people move into the cities, sanitation is becoming a great challenge in many developing countries. This is also the case in Ghana that is lacking far behind the sanitation targets set by the Millennium Development Goals (MDG) for water and sanitation. But simply increasing the number of latrines is only part of the solution. Access to latrines is a complex problem influenced by significant social and cultural issues, anthropologist Christopher Furlan found out during his fieldwork in a township, outside of the capital of Accra in Ghana.

What have you been studying?

I primarily studied how people interacted with their local sanitation landscape in order to provide inputs into a market-based sanitation development project that promotes private household latrine investment. As a business anthropologist I used ethnographic methods to investigate existing socio-cultural conditions and practices in households that already had invested in private latrines. The decision to look at those who were not being targeted by the project was based upon the idea that by understanding how latrines functioned in typical households in the township it would be possible to draw inferences about the success and problems of the future sanitation market being promoted by the project. Apart from providing useful market insights into ‘life with a toilet ’, this point of departure also revealed a fundamental flaw in Ghana’s current sanitation development strategy, the MDGs and the assumptions they rest upon.

What is Ghana currently doing to improve sanitation?

Ghana has two main strategies for sanitation development: firstly, ‘Community Lead Total Sanitation’ (CLTS) aimed at ending open defecation in rural communities. And secondly, the ‘National Environmental Sanitation Strategy’ (NESS) aimed at urban communities like  the township I looked at, intended to bolster access to sanitation through increasing the number of private household latrines. Undeniably latrine numbers must grow in order to overcome the health problems associated with defecation and urbanisation, and as such the NESS has resulted in recent legislation and the issuance of compliance notices amongst some households. These notices give the household a deadline to construct private latrine facilities or risk legal sanctions. Alarmingly these laws function to shift responsibility for sanitation development from the government onto individual households — an inexpensive way for the government to meet the MDG targets, and one that risks the construction of inappropriate technologies.

Why is this not working, what are the main obstacles to people using toilets? 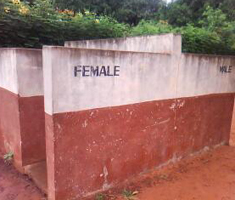 Fear of violation and lack of privacy keeps some women from using public toilets.

Whilst increasing household latrine numbers is positive, it does not mean people will actually use them. My study revealed a myriad of instances where people had latrines but engaged in open defecation, for example in traditional houses (one house containing many individual households) latrines were typically locked, access restricted to senior family members (some of whom lived outside of the township), whilst children and infants were almost universally excluded from household latrines across all housing types. Local culture plays a role too, people (especially women) associated disease with smell and heat arising from latrines and contact with flush toilets and actively chose open defecation as a healthy option. The threat of illness from a latrine outweighing the shame of being stumbled upon by a stranger or any negative health impacts of open defecation, which they were aware of.

Access to toilets is a top MDG priority; do you think this is wrong?

What is promoted under the MDGs is based on the assumption that if people have access to latrine facilities then they will use them and the health problems caused by open defecation and urbanisation will be solved. Although access is important, it does not guarantee usage and is therefore not the solution.  Focus must shift to how and why people interact with the entire sanitation landscape the way they do in order to improve latrine usage. In Sweden a ‘function-based approach’ moved sanitation regulation away from the prescription of technologies with function becoming the measure to gauge and regulate appropriateness. This opened the door for innovation and produced a number of new products into the Swedish on-site sanitation market. A similar approach could be adopted in the township I looked at as a living sanitation regulation model that holistically addresses local needs and conditions.

What would you and the research team recommend decision makers to do? 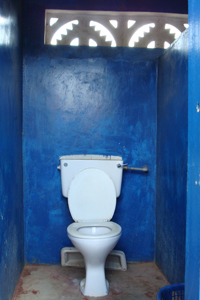 Private ownership of public latrines could be part of the solution to sanitation problems in Ghana.

Rather than imposing development targets onto communities, decision makers must keep an open mind. One way to do this is to view people’s practices as an ongoing dialogue about sanitation needs. They can then ask the right questions, like: why are people who have latrines continuing to defecate openly, is hundreds of pit latrines in a dense urban space the best option, and do household latrines need to be in the household? My thesis provides a market-based example for answering these questions for urbanizing townships.  Private latrines are proposed as large toilet blocks designed to match the local ideas associated with disease and toilets. Individual toilet cubicles are then purchased or rented by individual households, overcoming many of the negative environmental and socio-cultural problems of each household building a latrine. Moreover management and conveyance becomes easier making private latrines more affordable.

Six PhD-fellows in the SUSA Ghana project are doing research on related sanitation concepts in the same township. Leticia Ackun’s study has revealed interesting dilemmas on people’s usage and perceptions of private and public sites for defecation. Fred Nimoh has concentrated on performing economic analysis of the willingness to invest in latrines and has identified important potentials for driving the sanitation market forward including strengthening local financing opportunities.

The Master of Science (MSc) in Anthropology at the University of Copenhagen is a two-year degree programme taught in English.

Read more about MSc in Anthropology.

SUSA-Ghana is a research partnership between the University of Copenhagen, the Dodowa Health Research Centre, the University of Ghana and Kwame Nkrumah University of Science and Technology aimed at improving access to improved sanitation facilities among peri-urban residents in the Dangme West District, Ghana.

The research partnership is funded by Danida, the Danish Ministry of Foreign Affairs.